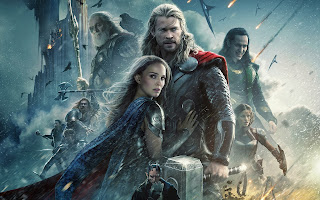 Well, you just knew it wasn’t going to be long before I busted out with this post given my track record with posts like Iron Man III and Writing, The Wolverine and Writing, and Man of Steel and Writing. There’s no stopping me now.

I went to see Thor: The Dark World opening weekend on Sunday. We had a different director with Alan Taylor and a different writer with Christopher Yost, Christopher Markus, and Stephen McFeely at the helm for the screenplay credits while Don Payne and Robert Rodat had story duties.

As with all movies there were some pros and cons. However, being the geek that I am, I like to look at them from a writing perspective since this is closely tied to the genre of material that I write. That being said, let’s look at the pros and cons.

Overall, the plot was a little better than the original Thor. The reason for this was that the antagonist for the story, Malekith, seemed to be more of a threat. This is not to say that the first Thor was bad. It wasn’t. It was written well but it was written more as a origin story so it was more of a setup.

Another aspect in the writing that I liked particularly was establishing the mortality of Asgardians. It was mentioned a couple times that they were not gods and this is proven throughout the movie. It contrasts the thinking of humans versus the thinking of Asgardians and is a reflection of our thinking today that some people who we tend to lift up as bigger than life are just as mortal as we are.

A thumbs down for me was that the main event happened on Earth. No solid explanation is given as to why and I believe that it should have been explained a bit more. Why was it significant that Earth had to be the focal point or was it truly just random? Why that particular place on Earth? It appears random as if they just needed a change of scenery and decided to go to Earth which is a sign of weak writing. No significance in the setting besides that it’s the place where it happened. This could have been written with a little more thought.

The ending with Loki is confusing as well. They never quite explain how he got there. And where is Odin? We can make some assumptions but I’m going to give them the benefit of the doubt that it will be explained later. However, doesn’t make a whole lot of sense how it was written. Clarity is essential. If you’re setting something up, you want to make it clear that you’re setting something up. This way, it leaves people wanting to come back for more instead of walking away confused.

Lastly, it took me a second to figure out the after credit scene and if you are not into comics, you’ll be lost a bit. It’s a bit confusing how it is written.

Overall, Thor: The Dark World was not bad. No major faux pas though it was a little slow in building in some areas. The writing wasn’t bad but it wasn’t as tight as it could have been either. Some of the action could have been truncated to add more character development which was markedly lacking. Now that I think about it, this was probably the biggest weakness in the writing. In any story, there needs to be enough character development in order to draw the reader in.

In summary, a strong protagonist is always a plus as well as lore elaboration and explanation. Know the lore of your world and pepper it into the story to shore up the foundations. In addition, make sure there’s a reason for events. They don’t have to be long explanations but there has to be one that supports the lore even in a small sense and it needs to be believable.

Lastly, if you leave your audience hanging, don’t leave them confused in a way that they are lost. Set it up so that they ask the questions you want them to ask and not so lost they don’t know what’s going on.