In case you’ve come in late to the game here, the book publishing industry is going through a bit of growing pangs. I’ll take it even further—mass media printed on paper is going through an upheaval and it’s been going on for years now. Newspapers versus the blogosphere. Now, it’s digital ereaders versus the tried and true paperback and hardcover book.

The advent of ebooks has allowed the independent writer to truly be in control of their own destiny when it comes to writing. Grant it, they were in control before (no one had to sign up with a publishing house. Wisdom just dictated that you did) but now even more so. Not only of the actual writing itself but every process in between from beginning to end. This is freedom, something conglomerates tend to abhor because it affects their wallets.

As a self-published writer (no shame here), part of my responsibility (this goes for any self-published writer) is to keep abreast of trends and industry news. This does nothing but empowers the indie author/publisher to effectively implement plans and ideas for success. One thing that is painfully apparent is that ebooks are on the rise….but they are still not the way most books are sold. 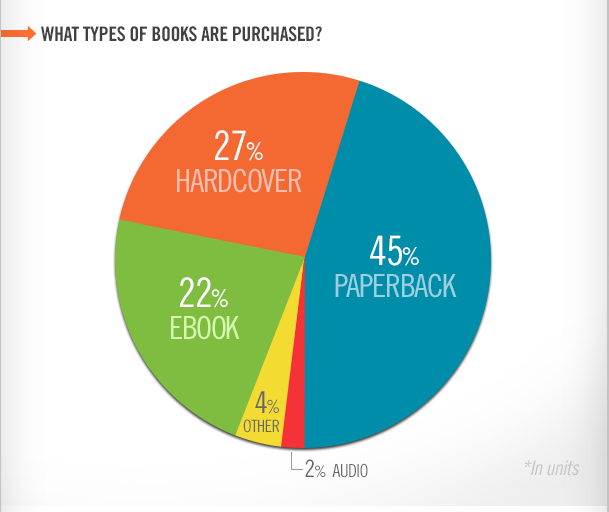 A recent survey of the Trends in Consumer Book Buying discovered that the vast majority of books—almost half—are paperbacks. Included in that list are ebooks which sell about half as many. That folks is information that we need to know and is essential for the serious self-published writer. It screams one thing: it would be wise to have a paperback book along with a an ebook offering. That is an awful lot of readers that would be missed without the paperback to help shore up sales. In addition, just doing ebooks means more competition for a smaller piece of the pie while doing both diversifies your market reach and therefore potential sales.

The surprise is the amount of hardcover sales, mainly because it’s higher than ebooks. I don’t foresee this lasting too much longer but it’s interesting nonetheless.

It doesn’t make a whole lot of sense to self-publish in only one format. Print is still here and is still the dominant player, no matter what folks would have you to believe. That being said, even though ebooks sales have slowed in comparison to years past, they are still climbing at double digit rates as it tapers off. That’s tapering off folks. That means that we can see a significant shift in the way books are purchased within the next five years. However, until that shift takes place, focusing just on ebooks is short circuiting your potential revenue. As a self-published writer, you need to have a paperback print version as well. Even if you’re not looking to quit your job any time soon, just on the basis of reaching more people, you need to have a paperback version for each one of your full length books.