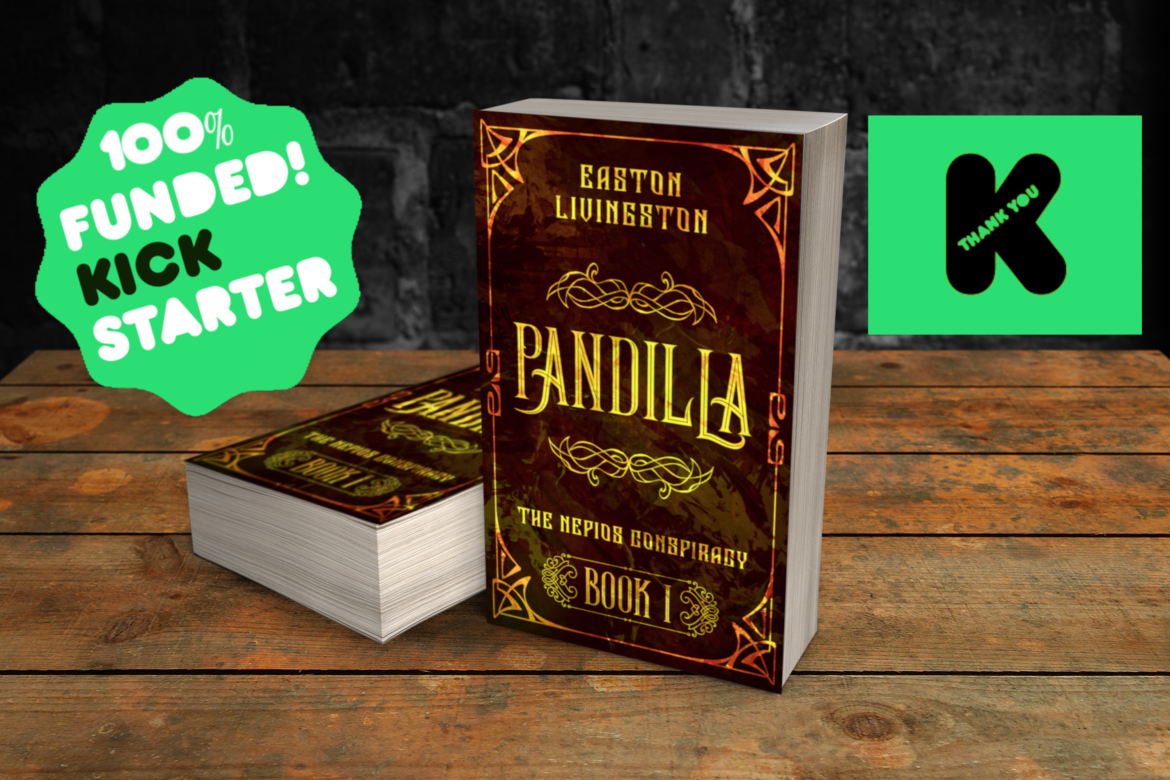 My Kickstarter strategy for success. Huh. Sounds like some marketing guru which I am not. Normally, I wouldn’t open up with something like that. But I wanted to share this because they three things turned the success of my campaign around. It’s been a couple weeks since I last posted and since my average is supposed to be a post a week, I have a few posts coming up before the month is out which should catch me up. These are mostly personal goals I have I want to stay consistent at not only for the sake of productivity, but so there is some regular love going on here at RIU HQ. So stay tuned for more.

As you may have guessed from my last post, the reason I fell behind is because of the Pandilla Kickstarter which I have been working on behind the scenes as well as doing the first round of edits on the book. I’m happy to announce that the Pandilla Kickstarter has funded, which means it is a success. They say the third times a charm, but by the grace of God, the second time can be as well.

There are eight more days to go in the Kickstarter campaign and we’re pressing on to meet that first stretch goal, which is an exclusive novelette about a strange broadcast that the Makarios Cadre has to investigate. It’s one of those stories that happens in between major assignments for them. It’s also a story that you will only ever get on Kickstarter. That’s only if we fund to the next level for the stretch goal. But even if we don’t, rest assured that it will come up again on Kickstarter and people will have another opportunity to grab it.

I’m very thankful for all the people who have contributed so far. I’m still working to get that funding goal as high as we possibly can get it. So it’s not over until it’s over.

This brings me to what I learned in between my first Kickstarter, which didn’t even reach 50%, and this one. Three key things which may help you if you ever decide you want to run a Kickstarter. This is not just for books, but I think just general information that runs across the board, no matter what you list.

This is one of those Kickstarter strategies I didn’t learn from someone else. I learned it from data gathering and trial and error.

It is a fact that the network of individuals you will ask for support for your project will be key to your success. You have to have realistic expectations about your goals based on your network. If your network is small, then your goal amount should be small as well. Unless you’re going to be asking for tons of money and running all kinds of ads (which I am assuming you have the budget for to begin with), focusing on your network and understanding that a wide number of people will come from it, you have to base everything on that network.

When Brandon Sanderson ran his Kickstarter for the special leather-bound edition of The Way of Kings, I couldn’t imagine that his Kickstarter would not be a success. He has a huge network of individuals who have been following his work. He’s a best-selling author and so you can imagine the amount of people who would come out to support something of that caliber. Don’t let anyone tell you otherwise—9 times out of 10—the size of your network matters. It’s why leading up to a Kickstarter, you should focus on building that network which is done primarily through an email list.

Kickstarter Strategy #2: Find Your Ideal Goal Amount, Then Lower It.

Something they tell you to incorporate as one of your Kickstarter strategies is to always go lower than what you originally planned. I have to admit—this was my biggest mistake of the Kickstarter campaign for Blackson’s Redemption. I bit off more than I could chew and didn’t take the first Kickstarter strategy up top into consideration. Of course, this should be enough to cover the cost of whatever it is that you’re doing. It should be the bare minimum. So you should have a desired goal and then a minimum goal. And then set it either at that minimum goal or somewhere between the minimum and desired goal.

Kickstarter Strategy #3: You Have to Work the Campaign

Something very important about a Kickstarter campaign, or any crowdfunding campaign, is that during the time it is up, you have to work the campaign. You don’t just slap it up there and wait for things to happen. This is definitely not one of those situations where if you build it, they will come.

So what should you be doing? You send out newsletters if you have an email list, post on social media, run ads (if that’s the thing you’re going to do), post in forums, and contact influencers connected to the industry you’re in. This has to be done not only ramping up to the Kickstarter but as the Kickstarter is live. Most Kickstarter’s are 30 days so you should do something every day to promote that Kickstarter.

Most authors will not use Kickstarter as a book launch platform. It is a rare thing to see an established author using Kickstarter as their platform to launch their books. I’ll be one of those individuals, God willing. The success of this Kickstarter has lit a fire under me, and I’m excited for future book launches. Some authors may say this is a lot of extra work you could use to write books. You just need to put your book out there and let it go. Or they would tell you some other kind of convoluted book launch strategy.

The fact of the matter is that there are many different ways to launch a book successfully. There is no cookie-cutter approach to this. It’s trial and error in line with whatever goal an author may have.

I’ve decided to make Kickstarter a part of my long-term strategy. There are other different platforms to use but Kickstarter is the way to go for me.

The great thing about Kickstarter is that once you start to build a bit of momentum, if you keep at it regularly, your network will grow over time. Then you can get them used to the idea of new projects launching on Kickstarter. The experience I’ve had this time around has been much better than -previous book launches I’ve had in the past… and more successful. This is novel number five for me. I’ve tried several ways to launch a book. This method is a winner, so I’m dedicated to make it work. I’m looking forward to launching the rest of my novels using Kickstarter, among other things.